Is there / will there be an Season4??

Is there / will there be an Season4??

will there be?
"In my books; Experience outranks everything"
Top

crap.. yeah season 6~!
"In my books; Experience outranks everything"
Top 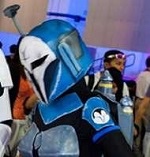 From what I've been reading so far, not likely.
So sad leh. I just started Season 1! with the thought of no continuation after Season 5 ... sigh.
BH / TI x 2 / ID / DZ
Approved : Bo Katan, ANH Tie Pilot, Reserve Pilot, Staff Officer, Bazine Netal
"Put some tea on. We'll be up in a minute."
Top

This was revealed earlier.
Season 6 of Star Wars: The Clone Wars, marketed under the name The Lost Missions, is the final season of the television series, released on Netflix on March 7, 2014. It was initially planned to air on Cartoon Network until March of 2013 when it was announced that Disney had cancelled the series.
"Fear. Fear attracts the fearful... the strong... the weak... the innocent... the corrupt. Fear is my ally."
Top
Post Reply
5 posts • Page 1 of 1