Keeping in touch with fellow Star Wars and SciFi Fans !

Hi all, while the Rose parade is still kinda fresh in our minds, we have an upcoming opportunity to do a bit of parading ourselves - St. Patrick's Day Parade.

The planning committee will be meeting with all the various groups in early-mid Feb and details will be released shortly.

So unless we get into Chingay, this may be THE formal parade we can participate in. I will update info as it becomes available to me. I'll like to open this event to anybody who would like to be part of the star wars marching contingent â€“ Imperial or Rebel is fine, however, there will need to be some minimum standards set for any costume so that the contingent does not resemble a rag tag army. Neither do we expect the costumes to all be up to 501st standards. Otherwise, if the costume isn't recognizable as a particular character, then we would be doing an injustice to Star wars. Let's discuss this as I think we want as many participants as possible yet, maintianing a good movie look.

Edit: Folks, for unique characters like Vader, Han Solo or Boba Fett, we can only have one person trooping in that character so do sign up early to avoid disappointment. Should there be problems, PM me and I'll see if I can help faciliate. Hope you guys understand that it'll be wierd to have 2 or 3 Vaders or Emperors.

Just to manage everyone's expectations, pls don't imagine a rose parade like effect. From last year, it is way way smaller and a very short route.

Update 1 (17/2/07)
There will be a horizontal banner at the head of our contingent. We will need 2 people to carry this banner.

Short route, no more than 1km. This is great for those who are having their kids dress up in costume. Route is from the river bank beside parliment House (close to south bridge road), past Q Bar, Asian Civilisation Museum (ACM) at Empress Place, across the Bridge, onto Battery Road and down towards UOB. Parade ends at UOB Plaza. The organisers are meeting with the Police to discuss road closures and route so as soon as I get confirm details, I'll scan the map and mark it up for all to see.

Parade numbers have doubled from last year, so do expect crowds.

Rally point is at the river bank beside Parliment House and will start from there. Water will be provided.

At UOB Plaza, there will be entertainment.

12.10 pm All participants and minders to report to TCC, Raffles Place MRT, Raffles Exchange Shopping #B1-63.

2.30 pm Move out from TCC to Parade staging area next to Parliament House.

2.40 pm Alpha squad to pick up banners from Q bar.

3.00 â€“ 3.30pm Parade official photographer will be moving from one group to another to capture group shots. 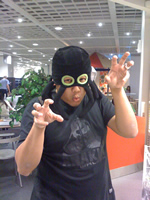 Let me see your identification...
Top

WOW! This is really going to be something! Great support, guys.

U want to do this as combined MM/starwars.sg event?

MM still have these costumes available...

But logistics will knock us out haha...we have to bring so many costumes out....

We can provide video coverage of the event also.
Top

Of course MM can combine with us. The more the merrier.

Afterall, my thought is that this would be a platform to celebrate Star Wars 30th Anniversary. So just add-on the MM folks to the sign-up list. Let's see if we can top the AOSW mini-parade.

Thanks for all the support from everybody who have signed up. As and when details are passed to me, I will update the first post so that it is easier for all to get info.
Paul Khoo

I'm in. I'll try to finish up my Boba by then...but if it can't be done, I'll reinforce my Sandtrooper one more time for that kickass event.

Return to “Gatherings and Events”